Eleven So-called Health Foods That Are Making You Fat

Here's a look at eleven foods labeled as "health foods" that, in reality, can cause weight gain. 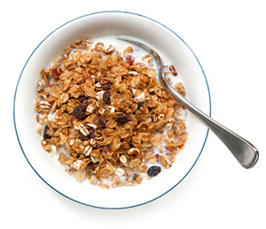 Most people believe cereals to be relatively healthy. However, they are actually among the most atrocious foods you can choose for breakfast. Cereal is most often full of refined carbs and sugar, which are the farthest things from diet foods. Beginning the day by consuming sugary cereal will cause your blood sugar and insulin levels to skyrocket. After some time passes, your body's blood sugar will crash, and you will begin to crave another refined, high-carb snack. This vicious cycle is unfortunately well known to those who consume diets that contain high amounts of carbohydrates.

Foods such as vegetables and eggs are much better breakfast choices, because they have protein. If cereal is essential to your breakfast, make sure you read the label first. The majority of cereals are full of sugar, and the ones that claim to be healthy are no exception.

Also known as agave syrup, agave nectar is falsely advertised as an "all natural" substitute for sugar. The truth is that there's nothing beneficial about agave. It may even be less healthy than sugar.

Sugar has about 50% fructose while agave has up to 99% fructose. While modest consumption of the fructose that is found in fruit is okay, eating high amounts of it when it is added to foods can be truly dangerous to your metabolism.

Excessive consumption of fructose may not only result in insulin resistance, but also raised levels of insulin. Too much fructose causes elevated levels of triglycerides and blood sugar and may dangerously impact your cholesterol and a variety of other metabolic problems.

If you use agave syrup because you think it's the healthier choice, stop using it immediately. It is much better to find a low fructose, natural sweetener.

Whole wheat bread is often suggested as a better choice over refined wheat bread. So, yes, it actually is a better choice but there are still some issues with it that make it only slightly better. The thing is, whole wheat bread isn't actually made from whole grains. The grain may be whole at the start but it is then crushed into easily-digested powdery flour that raises blood sugar quickly, having the same glycemic index as white bread.

While some grains are healthy, wheat isn't one of them.

Multiple studies found that wheat may result in health problems, particularly for those who suffer from a gluten sensitivity issue. 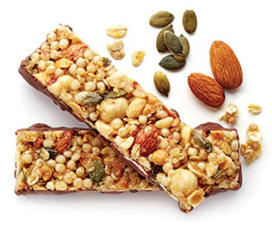 Everyone seems to think granola is healthy. Most people think that since it is made of whole ingredients, it must be healthy. However, just like other so-called health foods, it falls into a problematic category. Though granola's basic ingredients, like nuts and oats, may be healthy in principle, once it's mass-produced, it is altered so much and often stuffed full of sugar and oil that its health benefits are few to none.

Yogurt is universally thought of as a healthy choice; real yogurt actually is a healthy food. However, the majority of yogurt out there is low-fat yogurt, which is processed junk food. When fat is removed from a food, so is the taste. So the manufacturers add a ton of flavors in order to make it edible. These "flavors" most often consist of high fructose corn syrup, refined sugar or types of fake sweeteners.

New studies have found that contrary to popular belief, saturated fat is not harmful. This means that popular yogurt is processed to have a healthy substance removed and traded for incredibly unhealthy ingredients.

Additionally, there is no evidence to support the theory that fat from dairy causes obesity. A study even found that individuals who consumed the highest amounts of high-fat dairy products had the smallest risk of developing obesity. Those concerned with obesity can also look into health supplements to health them along.

So by all means, eat yogurt. But make sure you are eating pure, full-fat yogurt.

Full of antioxidants, nutrients, fiber and many other good-for-you stuff, vegetables are extremely healthy and that makes salads a healthy choice. The problem is that the majority of people think that vegetables don't taste great on their own so they douse their salads with dressing.

Commercial dressings are full of calories and are often made with high fructose corn syrup and soybean oil, which are very unhealthy foods.

A great alternative is making salad dressing at home. Use a little vinegar with extra virgin olive oil and add some natural seasoning like garlic, paprika - really whatever you like - to create a delicious salad dressing that is also a health-conscious choice.

Since it is made from fruit, people often think they're making a healthy choice when they drink fruit juice instead of soda. In reality, some fruit juices are just fruit flavored water sweetened with sugar, and actually contain not a trace of real fruit. Most fruit juices have the same amount of sugar content as sodas do.

Even if it is real fruit juice, though, you shouldn't consume that much of it. Why? Well, it's just like having fruit, but without any of the benefits. See, whole fruits have sugar, but the sugar is bound up with the fiber. That fiber impairs the release of the sugar into your bloodstream during digestion.

Also, without having to chew any fiber you can really consume huge servings of sugar in seconds. For example, a single glass of orange juice has the same sugar content as two entire oranges do.

Drinking diet soda instead of normal soda is an incredibly simple diet change. While this does lower sugar and calorie intake, it doesn't actually lead to weight loss. This could be because artificial sweeteners can cause increased hunger in some individuals. While the actual sweeteners don't have any calories, they could push you to consume other calories.

While people may lose weight while drinking diet sodas, it's most likely due to the fact that they have made other dietary changes as well.

When people hear the word "organic" they assume that food is healthy. While organic whole foods are extremely healthy, the same cannot be said for organic foods that have been processed. Reading the labels of most organic "health" snacks reveals that they are about as bad as most other processed foods.

Of course, the word "organic" may be listed in front of ingredients such as the sugar but organic sugar is as bad as normal sugar. The effects on your liver are the same.

Made with peanuts, dried fruits and maybe chocolate or grains, trail mix is actually full of energy. Dried fruit contains a potent sugar punch and nuts have a high amount of fat bound up in a small package. Because of this, it's a great snack choice when you are in need of energy, like an workout.

The problem is that most people who eat trail mix don't really need a lot of energy, so they end up eating a high-carb, high-fat snack and think it will help them lose weight. Unfortunately, it will not help with weight loss.

Gluten-free foods are all the rage today. The results of a survey in 2013 showed that some 30% of Americans are looking to consume less gluten. Because of this, food producers have hopped aboard the train and created gluten-free alternatives to popular foods.

However, the gluten-free replacements are most often still bad for you, because they're made with refined carbs, sugar and other not-so-healthy stuff.

If you want to eat gluten-free, then eat vegetables and meat, because they are gluten-free by nature. Remember, just because a package says "gluten-free" does not change the fact that it could still be junk food.

If all else fails with your diet, there are some excellent nutritional health supplements out there to help you along the way. Check out our many product reviews to help you decide which one would work for you.