A lot of people have found food to be their drug of choice and are not able to stop themselves from eating certain things, even though they know it is not healthy. These people suffer from the same symptoms of addiction that drug addicts do and biology backs them up. Research has proven that junk food works on the same area of the brain as addictive drugs. If you have an addictive personality, you are thus at risk of developing a very real addiction when it comes to food.

I have been there - I used to smoke, and was addicted to alcohol and drugs. Once I got myself sober, my addiction to food started. I can tell you - there is no difference between being a drug addict and being a food addict. All that changes is the substance being abused and societal acceptance.

It is also only recently that this has been acknowledged as a disorder and it still is not officially classified as such. That is changing though. Much research has gone into this disorder over the last couple of years to the extent of the problem and also its consequences. The outcome of the studies has been sending shockwaves through healthcare communities and seems to point to this being one of the most dangerous disorders of our time.

How to Diagnose Food Addiction? 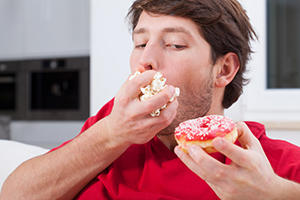 Food addiction cannot be diagnosed with a simple blood test so a questionnaire normally comes into play. The problem is that the DSM, a respected manual for mental health care practitioners, has still not included addiction to food as a disorder.

Fortunately, researchers at Yale have filled in the gap in diagnostic materials. Its Food Addiction Scale survey has 27 questions and these can help diagnose whether or not you have the disorder.

According to this test, someone who is diagnosed as being addicted to food has the exact same responses in terms of behavior that a person addicted to drugs would have.

How Widespread is the Problem in America?

The primary study that tried to establish how common this problem is, came out early in 2014. Over 134 000 women participated. Just under 6% were found to have met all the criteria. The number changed significantly within age groups with only about 2.7% of those considered elderly met the criteria while 8.4% of the group ranging in age between 46 and 64 did. Those that had not yet reached the age of 45 were excluded.

The study showed that there is a definite link between meeting the addiction criteria and being overweight or obese. The research also showed that there was a correlation between morbidly obese women and this disorder. Those with a body mass index of over 35 were nearly 20 times as likely to have the disorder. It was also established that a lack of exercise and increased levels of cholesterol were linked to this disorder. Depression also came up as a potential risk factor for developing food addiction. Eating to feel good is a sure fire way to gain weight. Luckily, there are some products available that work to help you with your non-stop eating and weight gain. 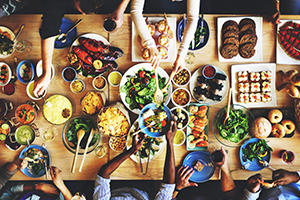 A Canadian study went into this in more detail. It had participants complete the Yale questionnaire and then took measurements in terms of body mass index, weight, fat percentage and waist measurement. Again, about 5.5% were diagnosed as having this disorder. In the obese category, this rose to 7.7%. It was found that men were half as likely to be diagnosed as food addicts when compared to women.

Those with the disorder weighed around 26 pounds more; had a body max index reading that was about 4.6 more; had about 8.2% more fat overall and had 8.5% more visceral fat on average than those who were clean.

What did come up as a bit of a surprise is that not all of those that were diagnosed with the disorder were actually overweight. Nearly 12% of those diagnosed weighed less than they should or were at a normal weight.

Something else that was discovered was that those who had some but not all the symptoms were also a lot more inclined to carry extra weight. There is a definite correlation when it comes to the number of symptoms encountered and being overweight. This could be taken to indicate that this behavior could drive weight gain, despite not being a full-blown addiction. This suggests that it could, in fact, be because junk food is so addictive that people eat too much and gain weight.

Some Subgroups are Even More at Risk

There have been a number of studies that break down the sample population into subgroups. Those who were classified as obese were a lot more at risk of being addicted to food.

When it came to patients who binge eat, more than half showed signs of this disorder. A different study set this number at nearly 100%. This can come as no shock, considering that both disorders have a lot of symptoms in common.

Some studies pointed to a disturbing trend - addiction to food can begin in children as well - youth is no defense.

What you Need to Know

About 6% of people have this disorder in America. The percentage almost triples when for obese people and about a quarter of women with morbid obesity were diagnosed with the disorder. Men are only about half as likely to develop this disorder.

About half of all binge eaters have the disorder and the symptoms are rife in children who are overweight. Even if you do not have the full-blown addiction, you may still be at risk of gaining weight or eating too much if you have some of the symptoms.

It would appear that this is a common disorder.

What Does This Mean to Me?

Most debates about gaining weight center around the assumption that there is a blanket cause that can be applied to all overweight people. Personally, however, I have come to believe that there are many more factors at play.

Food addiction should be looked at as a subtype when it comes to obesity. For a lot of people, it may be this disorder that drives them and they need a different healthcare approach.

The only sure-fire cure for addiction is going cold turkey. It is pointless to tell an addict to moderate their intake - if they could do this, they would not be an addict.

Food addiction has serious consequences for the sufferer and deserves to be taken seriously by their doctors.